We celebrate the birthday of Alfred Lord Tennyson, who was born on this day in 1809.

Tennyson was the fourth of twelve children in his family, and he became one of the most well-loved Victorian poets.
Today, you can take a tour of Tennyson’s walled garden on the Isle of Wight. Both the home and the garden have been restored to their former glory, and the property gets top ratings on TripAdvisor.

An 1895 newspaper shared this fascinating account of Tennyson's garden:
"Another orchard which I shall never forget is that which lives alongside Tennyson‘s Garden. It was only natural that one should recall the poet's lines:

(From "In Memoriam")
"O sound to rout the brood of cares,
The sweep of scythe in morning dew,
The gust that round the garden flew,
And tumbled half the mellowing pears!"
(And, from Song of the Lotos-Eaters:)
"Lo! sweeten'd with the summer light,
The full-juiced apple, waxing over-mellow,
Drops in a silent autumn night."

And, here's Tennyson’s most quoted sentiment is a favorite among gardeners:
“If I had a flower for every time I thought of you… I could walk through my garden forever.“ 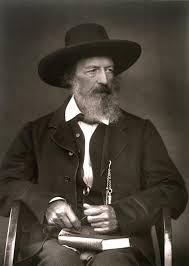