November 27, 1872
Today is the birthday of a lifelong American plantsman and master plant breeder Albert Etter.
Albert was a born horticulturist. When most children are mastering the alphabet and learning to tie their shoes, Albert was learning to graft and hybridize plants. By the time Albert was 12, his plant breeding was focused on dahlias and strawberries. His local newspaper in California reported that he had over 200 varieties of dahlia, thanks to his efforts in cultivating new hybrids.
Growing frustrated that his school books taught him nothing about nature, Albert dropped out at 14. Albert continued his breeding efforts and helped out on local farms. Thanks to the Homestead Act, Albert acquired 640 acres of free land on his 21st birthday. The land needed clearing, and the acidic soil required improvement. Thanks to Albert’s regular planting of cover crops like clover and vetch, his soil gradually improved. With his brothers’ help, Albert's place became increasingly self-sufficient, adding a lumber mill and raising Angora goats. Albert often wrote that his ranch provided him everything he needed - except flour and sugar. Over time, Albert’s ranch became known as Ettersburg.
Although Albert’s early work with strawberries brought him fame, his work with apples made him a legend. In his apple breeding, Albert focused on a unique and relatively unknown apple appropriately called Surprise. The Surprise apple was pink-fleshed and hailed from Kazakhstan. Over his lifetime, Albert created hundreds of apple varieties descended from the Surprise apple. In total, Albert crossbred 15,000 apples and a little over ten percent of those warranted additional experimenting.
Albert accelerated his apple-breeding efforts through top grafting. Here's how that works:

In an article, Albert wrote:

“How many is 15,000 apple trees?
Apple trees are usually planted 30 feet apart in the row.
Fifteen thousand would plant a row a trifle over 35 miles long.
[In contrast,] The little seedlings [that I grow,] are top-grafted on large trees, sometimes two or three hundred on a tree.”

One of Albert’s signature methods was to return again and again to the wild, foraging for new breeding stock. Now, many trained plant breeders of his era scoffed at Albert's use of wild crabapples. But to Albert, nature provided a bountiful supply of worthy strains. While some academic experts in his field dismissed Albert as a hillbilly, others recognized his cultivated wisdom honed through his love of experimenting, his unbridled innovation, and his fantastic recall for the minute details of his experiment station.
The public came to know just a handful of Alberts apples in the twilight of his life. In 1944, six years before his death, six Etter apple creations finally went mainstream after appearing in The California Nursery Company catalog: Alaska, All Gold, Humboldt Crab, Jonwin, Pink Pearl, and Wickson's Crab. Three years later, Albert’s Crimson Gold was released.
Today, the Pink Pearl is the most famous of Albert’s creations. With its red flesh and beautifully blushed, golden, translucent outer skin, the Pink Pearl remains a sensation.
In 1950, Albert died on a Sunday in November on his ranch near Ettersburg in Humboldt County. He was 78.
Now, some 70 years after his death, the race is on to find any remaining Etter apple trees before they reach the end of their lifespan. Tom Hart, of Humboldt Cider Company, is putting together a magnificent repository of Albert Etters apple trees. Tom’s goal is to take cuttings from any discovered Etter apple trees, graft them, and build an orchard - a living tribute - dedicated to the great Albert Etter. 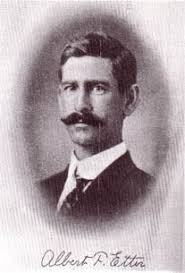