December 8, 1730
Today is the birthday of the Dutch physician, physiologist, and botanist Jan Ingenhousz (“ENG-in-house”).
Jan made one of the most significant botanical discoveries in history: photosynthesis.
Jan served as the personal physician to the royal Habsburg family in Austria. In 1771, Jan traveled to England with a group that included Benjamin Franklin. During their trip, the group called on Joseph Priestley, who had just made his own impressive discovery: that plant leaves absorb and emit gases.
Eight years later, Jan wrapped up his work with the Habsburgs and moved his family to England. In a fascinating turn of events, Jan started testing his ideas about plants in the same laboratory that Joseph Priestly had used - at Bowood House.
Jan extended Priestley’s work by adding light as a variable to his experiments. When Jan’s plants were placed underwater in a clear container, Jan exposed them to darkness and sunlight. In the dark, only a few bubbles appeared on the plant. A more exaggerated reaction occurred when Jan’s plants in the tank were placed in the sun: lots of little bubbles appeared on the leaves’ undersides. Jan learned that the bubbles made in sunlight contained oxygen, and the bubbles made in darkness contained carbon dioxide. Jan had proved photosynthesis. 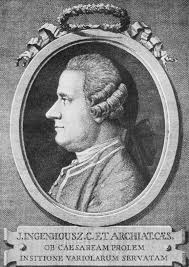