The Brain a Garden

December 15, 1673
Today is the anniversary of the death of the 17th-century philosopher, poet, scientist, fiction-writer, naturalist, and playwright Margaret Cavendish.
Margaret’s perspective on the natural world helped shape our modern viewpoint. And it should be noted that Margaret was the first woman to make a living from her writing. Yet Margaret has always been an easy target for ridicule; her points were often lost in confusing verse and the novelty of her ideas.
In one of her poems, she compared the brain to a garden:

The Brain a Garden seems, full of delight,
Whereon the sun of knowledge shineth bright,
Where fancy flows, and runs in bubbling streams,
Where flowers grow upon the banks of dreams.
There various thoughts as several flowers grow:
Some milk-white innocence, as lilies, show,
Fancies, as painted tulips’ colors fixed,
By Nature’s pencil neatly intermixt;
Some as sweet roses, which are newly blown,
Others as tender buds, not yet full-grown;
Some, as small violets, much sweetness bring.
Thus many fancies from the brain still spring.
— Margaret Cavendish, Similarizing the Brain to a Garden

One of my favorite poems by Margaret is called The Duchess to Her Readers. In this poem, Margaret shares her appreciation for her husband; theirs was a love marriage, and William helped Margaret with her work.

A Poet am I neither born nor bred,
But to a witty poet married:
Whose brain is fresh and pleasant as the Spring,
Where Fancies grow and where the Muses sing.
There oft I lean my head, and listening, hark,
To catch his words and all his fancies mark:
And from that garden show of beauties take
Whereof a posy I in verse may make.
Thus I, that have no gardens of my own,
There gather flowers that are newly blown.
— Margaret Cavendish, The Duchess to Her Readers

Virginia Woolf was not a fan of Margaret. In “A Room of One’s Own,” Virginia wrote,

“What a vision of loneliness and riot the thought of Margaret Cavendish brings to mind!
As if some giant cucumber had spread itself over all the roses and carnations in the garden and choked them to death.” 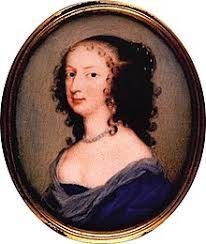