January 8, 1828
On this day, Eliza Ridgely married her fifth cousin and son of a Maryland Governor, John Carnan Ridgely.

The couple lived on the Hampton Plantation built by John's great-uncle Charles  Ridgely III in 1790. After construction, it was the largest private residence in the United States.

Eliza was the third mistress of Hampton and an avid gardener.
During the decades following their marriage, Eliza and John had five children, and Eliza spent a great deal of time improving Hampton’s gardens and landscape.
In 1859, the horticulturist Henry Winthrop Sargent wrote that “[Hampton] expresses more grandeur than any other place in America.” He was not a fan of that grandeur - Henry preferred a more natural garden landscape.

Eliza left her mark on the gardens at Hampton by doing something completely different. She fell in love with the Victorian garden trend of “carpet bedding,” which leveraged plant colors to create designs - like diamonds or circles. Other plants just provided contrasting colors.

In his book, The Garden Triumphant, David Stuart said,

“In the early Victorian bedding system, plant individualities were of no importance, each individual [plant] merely yielding the color of its flowers to the general show… The obsession with ‘show’ with plants merely as a ‘blaze of colors’ was all.”

Regarded as an accomplished gardener and horticulturist, Eliza had grand garden dreams. She installed extensive gardens, and her love for carpet bedding would have been a radical departure from gardening etiquette of the time. Because, before this trend, it was considered poor taste to plant a plant next to another one of the same color and variety. That was a big no-no.

In fact, in 1839, Henry Winthrop Sargent issued another dig at Eliza’s formal gardens when he said, they"quite disturb one's ideas of republican America.” He was definitely not a fan.

Over 4,000 acres surrounded Hampton House, and Eliza had more than enough room to develop impressive greenhouses, which along with the lavish gardens, were tended by slaves. And many people who tour Hampton today are surprised to learn that. They were not aware that slavery existed as far north as Maryland.
During their marriage, Eliza and John loved to travel, and on their journeys through Europe and Asia, Eliza collected exotic trees and plants for her Hampton gardens. Eliza’s love of citrus trees led to creating an orangery to help her citrus collection survive the harsh Baltimore winters.

Eliza Ridgely added specimen trees to Hampton’s formal landscape. Today a Lebanon Cedar stands on the mansion’s south lawn of the Great Terrace. And Ridgely family history says that Eliza brought the exotic tree to Hampton as a little seedling in a shoebox from the Middle East.

Eliza also selected the white and pink Saucer Magnolias that bloom in the spring and the magnificent fan-leafed ginkgo at the corner of the house. But, the oldest trees on the property are catalpas that predate the home.

And although they are quite common now, Eliza brought urns to Hampton. Made of Italian marble, Eliza’s fashionable urns surrounded the mansion. Now during Eliza’s lifetime, the urns would have been called “vases,” and they were meant to add classical beauty to the garden.

In 1854, American Farmer Magazine wrote that Eliza’s gardens expressed “more grandeur than anything in America.” The magazine also admired her irrigation system, saying that,

“a reservoir at the mansion… radiates to different sections of the garden where hydrants are placed, and by a hose, the entire garden can be watered at pleasure.
Last summer, when all other places in the neighborhood were dry and barren, the flower garden at Hampton presented a gorgeous array of bloom… Petunias, Verbenas, Geraniums, and other summer flowering plants, looked as though they lacked no moisture there.”

With the end of slavery after the Civil War, the Hampton estate fell into decline as the family struggled to maintain it.

A little while later, Eliza died at the age of 64. She was buried in the family cemetery on the estate.
Today the Hampton estate is a National Historic Site. And if you go to visit it someday, it's worth noting that the plants today are different. Many of the plants that are on the property need to be deer-resistant.
The famous portrait of the long-necked Eliza Ridgely standing beside her harp was painted by Thomas Sully - it hangs today in the National Gallery of Art. 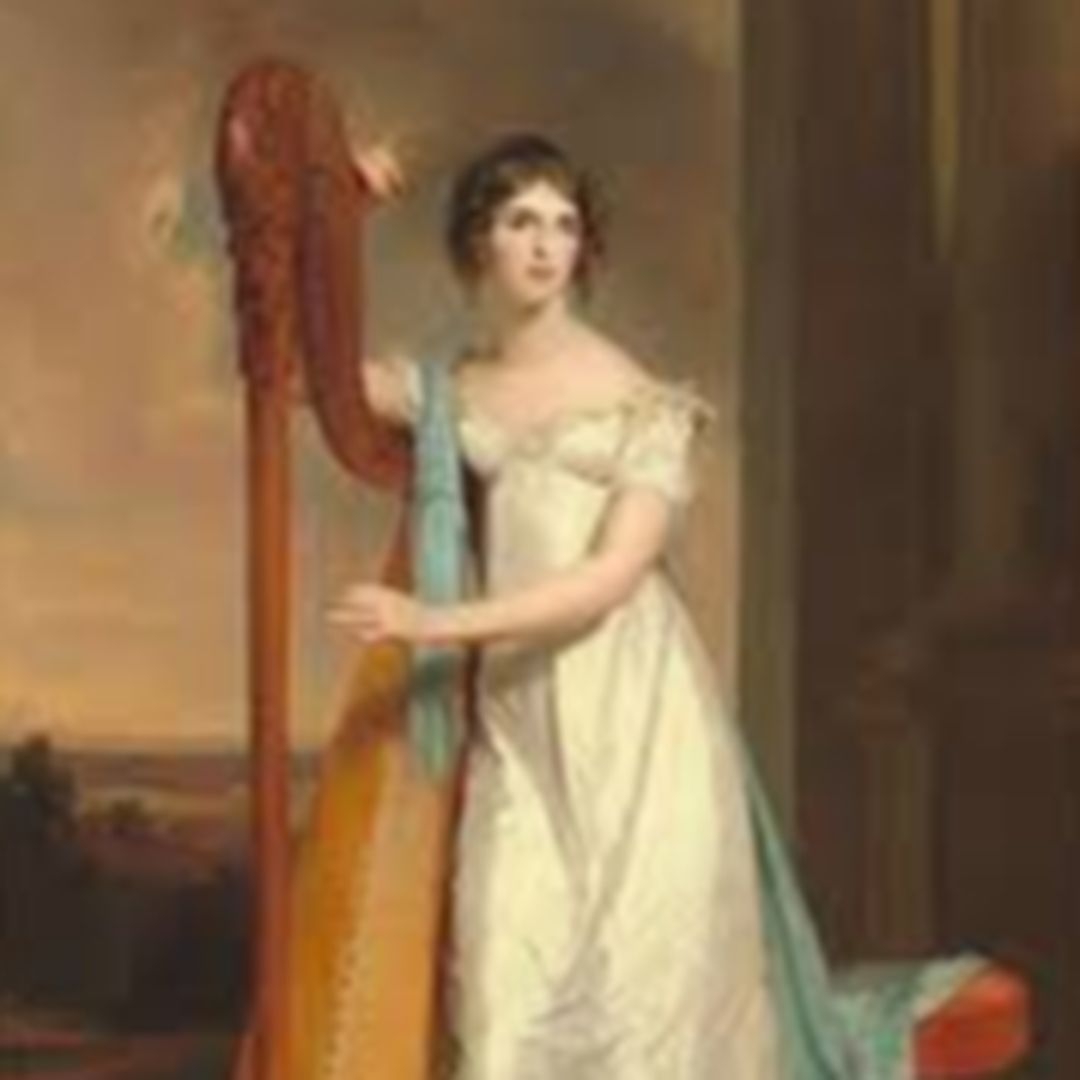 Agoston Haraszthy
← A Place For Us by Harriet EvansWalter Tennyson Swingle →