The Garden of Women

April 14, 1844
Today is the birthday of the German landscape and flower painter Helene Cramer who was born on this day in 1844.

Helen and her sister Molly were both painters in Hamburg, Germany. Their father, Cesar, forbade his daughters to become painters. And so, the two sisters didn’t start painting until middle age. Helen was 38 when she first picked up a brush. Her primary subject with flowers.

After studying with other artists and painters, Helen and Molly exhibited their art throughout Germany and at the 1883 World's Fair in Chicago. Most gardeners say that their favorite painting of Helene’s is her work called "Marsh Marigolds and Crown Imperials."

When Helen died in 1916, she was 72 years old. Both she and her sister are buried in Plot 27 of the "Garten der Frauen," Or the garden of women at the Hamburg Ohlsdorf cemetery. 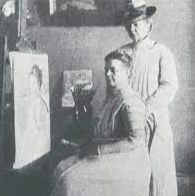