November 18, 1806
Today is the birthday of a son of Switzerland, Charles Leo Lesquereux, ("le crew"), who was born on this day in 1806.
Leo was born with a naturalist's heart. A self-described dreamer, Leo loved to go out into the forest, and he collected all kinds of flowers and specimens for his mother.
Yet, when Leo was just seven years old, he fell off the top of a mountain. Leo was carried back to his home completely unconscious, with multiple injuries to his body as well as head trauma. Leo remained motionless and unconscious for two weeks. His survival was a miracle, yet the fall resulted in hearing loss that would eventually leave Leo utterly deaf by the time he was a young man. Despite the tragedy, nature still ruled Leo's heart. As Leo matured, he tried to provide for his family as a watchmaker. But, Leo found himself returning again and again to the outdoors.
Eventually, Leo began to focus his efforts on peat bogs, and his early work protecting peat-bogs attracted the attention of Louis Agassiz of Harvard, who invited Leo to bring his family to America. When he arrived, Leo classified the plants that Agassiz had discovered on his expedition to Lake Superior.
Then, on Christmas Eve, 1848, Asa Gray summoned Leo to help William Starling Sullivant. Gray predicted the collaboration would be successful and he wrote to his friend and fellow botanist John Torrey:

"They will do up bryology at a great rate. Lesquereux says that the collection and library of Sullivant in muscology are Magnifique, superb, and the best he ever saw."

Leo packed up his family and traveled to Columbus, Ohio, and settling near the bryologist, William Starling Sullivant.
Bryology is the study of mosses. The root, bryōs, is a Greek verb meaning to swell and is the etymology of the word embryo. Bryology will be easier to remember if you think of the ability of moss to expand as it takes on water. Mosses suited Leo and William's strengths. Mosses require patience and close observation, scrupulous accuracy, and discrimination. Together, Leo and William wrote the book on American mosses. William funded the endeavor, and he generously allowed Leo to share in the proceeds.
In 1873, Sullivant contracted pneumonia - ironically, an illness where your lungs fill or swell with fluid - and he died on April 30, 1873. Leo lived for another 16 years before dying at the age of 83.
It was Leo Lesquereux who said,

"My deafness cut me off from everything that lay outside of science.
I have lived with Nature, the rocks, the trees, the flowers.
They know me, I know them.” 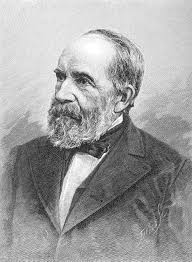