November 23, 1862
Today is the birthday of the American plant physiologist, botanist, educator, and inventor Alexander Pierce Anderson.
Alexander grew up in rural Southeastern, Minnesota. His cousin, John Lind, became the governor of Minnesota.
After getting a degree in botany, Alexander went on to teach at Clemson. Three years later, he went to work for the New York Botanical Garden in research. This unassuming position would lead Alexander to a fantastic discovery.
Suspecting that microscopic amounts of water existed inside the nucleus of starch crystals in rice, Alexander worked on finding a way to get the water out. Alexander’s experiment produced “puffed rice,” and breakfast cereal was changed forever.
Alexander shared his discovery at the 1904 St. Louis World’s Fair. By the end of the fair, Alexander had sold over 20,000 pounds of puffed rice, and he had won the world’s attention. 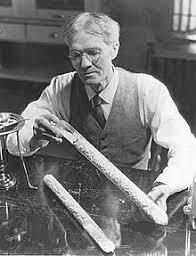