November 25, 1880
Today is the birthday of the British political theorist, writer, publisher, civil servant, and gardener Leonard Sidney Woolf.
Leonard was the husband of Virginia Woolf. Leonard was the primary gardener and garden designer of Monk's House - although Virginia helped him. Virginia and Leonard lived at the house when they first purchased it in 1919 until their deaths.
The garden at Monk's House was a retreat and a place where they could both escape from London’s chaos.
Leonard loved to be in the garden gardening. He hated tea roses and floribunda roses. He loved fruit trees like apples and pears, and he sold the fruits to make money. Leonard's devotion to the garden was a source of consternation for Virginia. Leonard spent so much of his time and money on the garden that Virginia famously complained, “We are watering the earth with our money!” Leonard recorded all of his Monk's House garden income and expenditures in a gorgeous dark green and pink ledger book. The first line in the book is dated August 26th, 1919, and he recorded the first gardening work performed by gardener William Dedman.
Virginia described Monk's House as "the pride of our hearts.’" In July of 1919, Virginia wrote that gardening or weeding produced "a queer sort of enthusiasm." When Virginia suffered bouts of depression, the garden at Monk's House was where she went to recover and heal.
And, since both Virginia and Leonard kept diaries, we know today that the garden was a frequent topic.
On September 29, 1919, Virginia wrote:

"A week ago, Leonard's wrist and arm broke into a rash. The doctor called it eczema.
Then Mrs. Dedman brushed this aside and diagnosed sunflower poisoning.
[Leonard] had been uprooting them with bare hands.
We have accepted her judgment."

One of Virginia's favorite places to write was in the garden at Monk's House. She had a small converted shed that she called her writing lodge. Every morning on her way to the lodge, Virginia walked through the garden. The Monk's House garden was THE place where she wrote some of her most famous works.
One story illustrates Leonard's devotion to gardening. In 1939, as the second world war approached, Virginia called for him to come inside to listen to "the lunatic" Hitler on the radio. But Leonard was in the middle of tending to his Iris, and he shouted back:

”I shan’t come. I am planting iris, and they will be flowering long after he is dead.”

"I know that Virginia will not come across the garden from the Lodge,
and yet I look in that direction for her.
I know that she is drowned, and yet I listen for her to come in at the door."

And, there were two Elm trees at Monk's House garden that the Woolf's had sweetly named after themselves, “Virginia and Leonard.”
Leonard buried Virginia’s ashes under one of those Elms and installed a stone tablet with the last lines from her novel The Waves:

“Against you, I fling myself, unvanquished and unyielding, O Death! The waves crashed on the shore.” 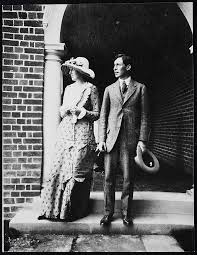