November 26, 1906
Today is the anniversary of the death of the German-American horticulturist and nurseryman George Ellwanger ("El-WANG-ur").
In the mid-1800s, George Ellwanger and his Irish business partner and experienced nurseryman, Patrick Barry, claimed their Rochester, New York nursery was the largest in the world. Built on 650 acres along Mount Hope Avenue, George started his business on land that boasted an old pear orchard.
A renaissance man, George also started writing books on a variety of topics - from gardening and gastronomy to poetry. A perpetual seeker, George returned to Europe to hunt for fine trees to propagate in America.
The fruit of George’s vision is evident throughout Rochester but perhaps no more so than in the grand European beeches that dot the city streets and parks. The beeches include several unique species like fern-leaved, copper, purple, and weeping beeches. Today, Rochester has 168 different trees within the city limits, and Charles Sprague Sargent dubbed Rochester the “City in a Forest.”
George and Patrick were also known for their fruit trees. In 1900, Mount Hope Nursery exhibited 118 varieties of pears at the Paris Exhibition, which won them a gold medal diploma.
In 1888, George and Patrick donated 20 acres of their Mount Hope Nursery along with hundreds of plants to the City of Rochester, which resulted in the creation of beautiful Highland Park. In a Noah’s-Ark-like gesture, George and Patrick donated two of every tree specimen in their nursery toward the effort to create Highland Park.
Twelve years after George died on this day, The Mount Hope Nursery closed for good.
Today, Highland Park is home to an annual Lilac Festival. Each year visitors stroll the grounds to smell the lilacs, visit Warner Castle and experience the Sunken Garden.
Here are some words George wrote about beech trees from his lovely book called The Garden’s Story:

“If we take yellow alone for the color-standard, the beech is without an equal. A beech, indeed, is always beautiful.
Its colors still remain attractive in late November, varying from rich Roman ochre to deep-brown bronze and from pale rose-buff to lustrous, satiny gray.
Its harmony is of marked loveliness in winter, a faded elegance clinging to it like a chastened autumnal memory.”

And here’s a thought from George regarding mushrooms from his book called The Pleasures of the Table:

"Mushrooms are like men - the bad most closely counterfeit the good." 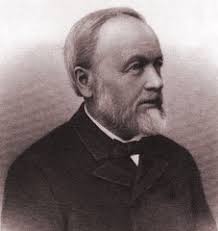