"Life is short, and books are long."

December 10, 1911
Today is the anniversary of the death of the Victorian British botanist, explorer, President of the Royal Society, and director of the Royal Botanic Gardens, Kew, Sir Joseph Dalton Hooker, who died at 94.
Joseph accomplished much during his long life. The botanic gardens of the world were a discovery and classification network that Joseph masterfully orchestrated. To Joseph, the botanic gardens were essentially botanical laboratories on a mission to enhance the world's economy and promote trade.
And Joseph was Charle’s Darwin’s closest friend and collaborator. In fact, they corresponded about Darwin's theory before it was made public. And Joseph was instrumental in getting Darwin's work published. Many regard Joseph as Darwin’s PR man.
Joseph was brilliant and concise.
It was Joseph Dalton Hooker who once famously wrote,

“Life is short, and books are long.”

In 1877, Joseph was knighted for scientific services to the British Empire.
And here's an adorable factoid about Joseph: Kew Gardens shared that, during his travels, Joseph would send letters to his young son with the salutation “my dear little Lion” or “my dear cub.” 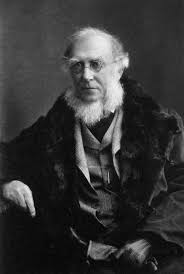