December 11, 1911
Today is the anniversary of the death of the French flower breeder Victor Lemoine ("Loom-one"), who died on this day in 1911.
Victor enhanced the beauty of so many flowers in our gardens: Lilacs, Mock-Oranges, Phlox, Peonies, Gladiolus, Tuberous Begonias, Geraniums, and Deutzias.
Around the year 1850, Victor borrowed money from his gardener father and began a nursery that survived three generations thanks to his son Emile and his grandson Henri. The Lemoine nursery thrived on land bought in Nancy, France (pronounced "non-cee"). A few years after starting his nursery, Victor created his first double-flower on the Portulaca grandiflora or the Moss Rose. As with so many of Victor's creations, the double-flower created double the beauty.
In 1854, Victor turned the original five-petaled single blossom of the geranium into a double-flowered stunner he named after his hometown, called "Gloire de Nancy" or "Glory of Nancy."
And Northern gardeners owe Victor a debt of gratitude for his work with peonies. Victor crossed the Paeonia wittmanniana with the Siberian albaflora; creating a peony that could withstand a winter freeze. It was Victor Lemoine who created some of our most memorable heirlooms: the white Le Cygne or Swan peony, the Primevere with creamy white outer guard petals, and packed with canary yellow petals inside, the blush-colored Solange peony, the pink Sarah Bernhardt, La Fee the Fairy peony, and the creamy-white Alsace-Lorraine peony.
But, it is the Lilac that will forever be associated with Victor Lemoine. Incredibly, Victor didn't start working on Lilacs until he was almost fifty. That said, Victor's wife, Marie Louise, was his tireless assistant when his eyes and fine-motor skills were failing. Marie Louise hand-pollinated the little lilac flowers, helping both her husband and her son with hybridizing.
Victor worked magic with his Lilacs. He made them bloom earlier and later. Victor improved the quality of the bloom, and he expanded their color spectrum. And Victor Lemoine grew the very first double Lilac. By the time the Lemoine nursery closed its doors in 1968, Victor and his family had bred 214 new Lilac cultivars. 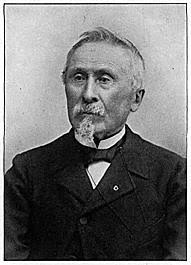