In addition to his botanical discoveries, his journal describes traveling through a terrible storm during his journey,

"It was now after noon; I approached a charming vale...

Darkness gathers around, far distant thunder rolls over the trembling hills; ...all around is now still as death,

... A total inactivity and silence seems to pervade the earth; the birds afraid to utter a chirrup, ...nothing heard but the roaring of the approaching hurricane; ...

Now the lofty forests bend low beneath its fury,... the face of the earth is obscured by the deluge descending from the firmament, and I am deafened by the din of thunder; the tempestuous scene damps my spirits, and my horse sinks under me at the tremendous peals, as I hasten for the plain.

I began to ascend the Jore Mountains, which I at length accomplished, and rested on the most elevated peak; from whence I beheld with rapture and astonishment, a sublimely awful scene of power and magnificence, a world of mountains piled upon mountains." 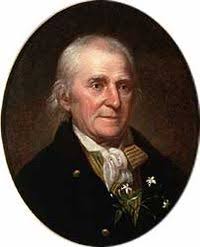