The poet, Algernon Swinburne, was born on this day in 1837.

In his poem, A Forsaken Garden, he describes a garden - or rather, “the ghost of a garden.”

At the beginning of the show, we talked about the dreams we have for our gardens. In this poem, the dreamer of the garden has left, and the garden has become a nightmare. Although the sun still shines and the rain still falls, the beds in the garden are blossomless.

Now there is only brushwood and thorn. Branches and briars cover the paths. Even the weeds are dead. The only thing left is one gaunt bleak blossom of scentless breath.

Here are the first five verses of A Forsaken Garden -

In a coign of the cliff between lowland and highland,
At the sea-down's edge between windward and lee,
Walled round with rocks as an inland island,
The ghost of a garden fronts the sea.
A girdle of brushwood and thorn encloses
The steep square slope of the blossomless bed
Where the weeds that grew green from the graves of its roses
Now lie dead.

The fields fall southward, abrupt and broken,
To the low last edge of the long lone land.
If a step should sound or a word be spoken,
Would a ghost not rise at the strange guest's hand?
So long have the grey bare walks lain guestless,
Through branches and briars if a man make way,
He shall find no life but the sea-wind's, restless
Night and day.

The dense hard passage is blind and stifled
That crawls by a track none turn to climb
To the strait waste place that the years have rifled
Of all but the thorns that are touched not of time.
The thorns he spares when the rose is taken;
The rocks are left when he wastes the plain.
The wind that wanders, the weeds wind-shaken,
These remain.

Not a flower to be pressed of the foot that falls not;
As the heart of a dead man the seed-plots are dry;
From the thicket of thorns whence the nightingale calls not,
Could she call, there were never a rose to reply.
Over the meadows that blossom and wither
Rings but the note of a sea-bird's song;
Only the sun and the rain come hither
All year long.

The sun burns sere and the rain dishevels
One gaunt bleak blossom of scentless breath.
Only the wind here hovers and revels
In a round where life seems barren as death.
Here there was laughing of old, there was weeping,
Haply, of lovers none ever will know,
Whose eyes went seaward a hundred sleeping
Years ago. 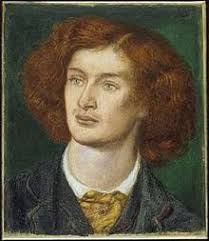