All week long, The Daily Gardener has been sharing quotes from the author Beverley Nichols, who was born on Monday of this week in 1898.
A prolific writer, Nichols is best remembered for his gardening books. Today I'm featuring excerpts from his book called Forty Favourite Flowers. It is exactly as described, Nichols sharing his top selections; the flowers he loved most in his garden; which he described this way:
“A great deal of weeping goes on in my garden, but it is a happy sort of weeping, for all this bending of branches and bowing of heads is simply due to the fact that so much beauty is displayed on so small a stage.”
Nichols arranged this book simply, using alphabetical order. Then he just shares some of his favorites. Here are some excerpts for you:
Algerian Iris:
One of my grandfathers died of a clump of Iris stylosa; it enticed him from a sickbed on an angry evening in January, luring him through the snow-drifts with its blue and silver flames; he died of double pneumonia a few days later. It was probably worth it.
Magnolia:
"I must confess that, for me, the flower of the magnolia is most beautiful when life has almost ebbed from it. These are the twilit hours when the petals flag and falter when their immaculate ivory texture dims when they glow with a ghostly radiance that seems to come from another world."

Regal Lily:
"The regal lilies do indeed praise the Lord. Some of my own, last summer were so exultant that they praised Him through no less than thirty snow-white trumpets on a single stem, and even the most accomplished angel could not do much better than that."
Iris Siberica:
<pdir="auto">How can one ignore... that singular infinitely sinister blossom Iris siberica? This latter flower can undoubtedly claim to be exclusively dressed, for the petals of no other blossom has Nature designed so curious of fabric, vein with slate and violet and purple.
Fritillairies:
Each Stage of our lives has its "signature" flower, and those of us who keep diaries would have a little difficulty in assigning to each year those flowers which are especially evocative... Fritillairies are linked with my years as an undergraduate... Year after year, for generation after generation, these flowers have danced in the background through the lives of England’s youth.
Mesembryanthemum:
The flower is a startling proof of the fact that when nature decides to be vulgar - really vulgar - she can achieve the effects of almost blinding beauty. For nothing could be more opulent, more blatant, more shamelessly exhibitionist than a bed of the Mesembryanthemum in full bloom. Magenta jostling scarlet, screaming at cinnamon, fighting with shocking pink, yelling against a dozen shades of orange and vermilion.
Caryopteris:
Paradoxically, blue is the color that makes many people see red, by which I mean that fears arguments are continually developing as to which flower is the bluest... The Caryopteris is radiant in any weather... The blue of its petals seems to have the quality of caring for great distances, as though it were some sort of floral evangelist with a message of good tidings for all the world.
Summer Hyacinth:
On an August night, when the moon is full, there is an almost ectoplasmic radiance around its petals.
Golden-bell clematis:
If I had to confine my choice of creepers to a single-family – what a hideous thought! – I should probably choose the family of clematis. And if I were limited to a single member of the family, I should probably select Clematistangutica. I said "probably" because these hypothetical decisions are so excruciating.
Finally, in FFF, Nichols offered some sweeping thoughts that will undoubtedly strike a chord:
“One of the many reasons why gardens are increasingly precious to us in this day and age is that they help us to escape from the tyranny of speed. Our skies are streaked with jets, our roads have turned to race-tracks, and in the cities, the crowds rush to and fro as though the devil were at their heels. But as soon as we open the garden gate, Time seems almost to stand still, slowing down to the gentle ticking of the Clock of the Universe.” 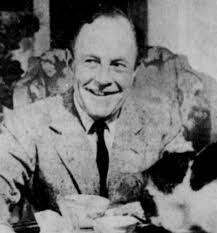 Down The Garden Path