December 7, 1817
Today is the birthday of the American botanist and professor Edward Tuckerman.
A specialist of lichens and other Alpine plants, Edward helped found the Natural History Society of Boston. As a professor at Amherst College, Edward spent his spare time botanizing in the White Mountains of New Hampshire. Today Tuckerman Ravine is named in honor of Edward Tuckerman.
America owes a debt of gratitude to Edward for rescuing some of the Lewis and Clark specimens at an auction.
It turns out that after the Lewis and Clark Expedition, a botanist named Frederic Pursh was hired by Meriwether Lewis to process the plants from their trip. After butting heads with his boss Benjamin Smith Barton and Meriwether’s apparent suicide, Frederick Pursh took the Lewis and Clark specimens and went to England. Once in England, Pursh reached out to botanists Sir James Edward Smith and Aylmer Lambert about putting together the Flora of North America.
Ultimately, Aylmer became his botanical fairy godfather. Aylmer had a substantial personal botanical library, herbarium, and funding. Aylmer also forced Pursh to be productive.
Frederick Pursh was kind of a rough and tough guy, and he was an alcoholic. Aylmer made a space for Frederick in the attic of his house. Once Aylmer got him up there, he would lock Frederick in for stretches at a time to keep him focused on the project. It was an extreme way to deal with Frederick’s demons, but it worked.
It took Pursh two years to complete the Flora of North America, and the whole time he was racing against Thomas Nuttall, who was working on the same subject back in America.
American botanists felt Frederick Pursh had pulled the rug out from under them when he took the expedition specimens to England. And this is where Edward Tuckerman enters the story. Somehow Edward learned that the Lewis and Clark specimens that Pursh had brought to England were going to auction.
It turns out Aylmer had hung on to all of Pursh’s material, including the Lewis and Clark originals. In 1842, after Aylmer died, the Lewis and Clark specimens and papers were up for auction along as part of his estate. Somehow Edward realized the value and the important legacy of these botanical specimens and papers. After winning the items, Edward eventually donated all of the material to the Academy of Natural Sciences in Philadelphia. 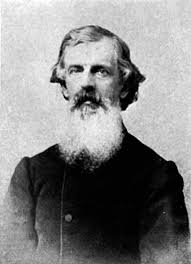