Today, David Landreth started the first American commercial seed business in Philadelphia, Pennsylvania.
David and his family immigrated to Montreal from England in 1780. Four years later, David relocated his family to Philadelphia and named the company simply David Landreth.
David was one of the first nurseries to propagate seeds from the Lewis and Clark expeditions. He introduced the Mexican Zinnia in 1798, the garden tomato in 1820, the 'Landreths’ Extra Early' pea in 1822, and the 'Bloomsdale' spinach in 1826.
His son, David Jr, took over the business after his death. David Jr. was one of the founding members of the Pennsylvania Horticultural Society, which started in 1827.
Today the Landreth Seed Company is the fifth oldest corporation in America. 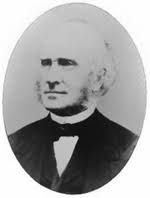