Today is the birthday of the English gardener, architect, and Member of Parliament, Joseph Paxton.
Joseph Paxton was brilliant. It was Charles Dickens who dubbed him, "The Busiest Man in England."
Joseph designed the Crystal Palace, aka the People's Palace, for the first World's Fair. The Crystal Place was a large exhibition hall. It was an extraordinary and revolutionary building.
Joseph was the head gardener to the Duke of Devonshire in Chatsworth. Now, you might be wondering how Joseph's job as the head gardener had given him the experience he needed to create the Crystal Palace. Well, the answer is simple: he had built four massive greenhouses for the Duke over fifteen years from 1833 to 1848, and that made Joseph one of the top greenhouse experts in the world. And, English royalty knew it.
Don't forget that the beautiful Crystal Palace was essentially a large greenhouse. Gardeners will appreciate that Joseph's iron and glass architectural plans were inspired by the "transverse girders & supports" of the giant water lily - which itself is an architectural wonder.
Now Instead of creating a large empty building for exhibits, Joseph decided to build his greenhouse around and over the existing Hyde Park. The high central arch - the grand barrel vault you see in all the old postcards and images of the Crystal Palace - actually accommodated full-sized trees that were already in the park when Joseph began to build around them.
Joseph's Crystal Palace was built in a very short amount of time, and this was due again to Joseph's expertise and connections. He had built relationships with various iron and glass companies in building greenhouses for the Duke, and he had even designed many of the components needed to create a greenhouse. For instance, the large beautiful columns also served a purpose: drainage.
The Joseph Paxton biographer Kate Colquhoun wrote about the immensity of the Palace:

“[Paxton’s] design, initially doodled on a piece of blotting paper, was the architectural triumph of its time. Two thousand men worked for eight months to complete it. It was six times the size of St Paul's Cathedral, enclosed a space of 18 acres, and entertained six million visitors.”

The Crystal Palace was an enormous success and was open every day except Sundays all during the summer of 1851. Queen Victoria and Albert were there on the day it opened - May 1st. And by the closing day on October 11th, six million people had walked past the international exhibits at the Crystal Palace.
For his work with the Crystal Palace, Joseph Paxton was knighted. Still, if I could knight Joseph Paxton, I would honor him for cultivating my favorite breakfast item: the Cavendish banana - the most consumed banana in the Western world. Naturally, Joseph cultivated the banana in the greenhouses he built for the 6th Duke of Devonshire - William Cavendish - who is honored with the name of the banana.
Even with the perfect growing conditions, it took Joseph five years to get a banana harvest. But, in November 1835, Joseph's banana plant finally flowered. By the following May, the tree was loaded with more than 100 bananas - one of which won a medal at the Horticultural Society show in London.
Today, bananas still grow on the Devonshire estate, and the Cavendish banana is the most-consumed banana in the western world. It replaced a tastier variety, which was wiped out by a fungal disease in the 1950s.
Today, work is underway to create a Cavendish banana replacement. Without attention to this matter, we will someday see the extinction of the Cavendish banana.
Now, if you'd like to read about Joseph Paxton - he's such a fascinating person - you should really check out the biographies written by Kate Colquhoun. Her first Joseph Paxton biography is called A Thing in Disguise: The Visionary Life of Joseph Paxton (2003),and her second book is called The Busiest Man in England: The Life of Joseph Paxton, Gardener, Architect, and Victorian Visionary (2006). You can get a used copy of either of these books and support the show, using the Amazon Link in today's Show Notes for around $10. 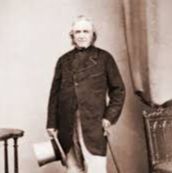