December 23, 1805
Today is the anniversary of the death of the Scottish gardener, botanical illustrator, and the very first plant hunter for Kew, Francis Masson.
After proving himself capable at Kew, Joseph Banks sent Francis on an expedition to southern Africa, where he met up with the Swedish botanist Carl Peter Thunberg.
Together Francis and Carl ventured into the veldt and the Blue Mountains. Surviving the extreme heat, lack of water, and dangerous wild animals, Francis made it back to England in 1775. With his gardener’s eye for ornamentals, Francis brought back many plants and seeds to England. In a letter to Linnaeus, Francis reported he had

“added upwards of 400 new species to his Majesties collection of living plants”.

Among Francis’ specimens were gladioli, irises, kniphofias, lobelias, and pelargoniums as well as the stunning bird of paradise flower, which was named to honor the wife of George III, Queen Charlotte: a patroness of the arts, an amateur botanist in her own right, and a champion of Kew Gardens. And the name of the plant recognized the fact that the Queen was born in Germany in an area called Mecklenberg-Strelitz. And so, the botanical name for the Bird of Paradise is the Strelitzia reginae ("stray-LIT-zee-ah REJ-in-ee.”)
As for Francis, after his trip to South America, he went on expeditions to North America, Portugal, and Northern Africa. But in 1785, Francis returned to his favorite destination: South Africa. This time, Francis spent a decade there - botanizing deep into the country’s interior. And it was during this time that Francis discovered the arum lily and the calla lily. And when he wasn’t plant hunting, Francis was busy cultivating his magnificent personal garden in Cape Town. Today, gardeners marvel at Francis’ drawings of South Africa's Cape Floral Kingdom.
In the twilight of his life, Francis experienced a dreadful voyage to North America. Between two run-ins with pirates and terrible weather, Francis’ ship barely made it to New York. And after discovering the Trillium grandiflorum on his way to Canada, Francis died on this day in 1805.
It was Francis Masson who pioneered plant exploration and transformed European gardens through his discoveries of over 1700 species. Today at Kew Gardens, you can see the oldest potted plant in the world - it’s an Eastern Cape Giant Cycad (Encephalartos altensteinii). It basically looks like a large potted palm cycad. It was brought to England in 1775 after Francis Masson’s first trip to South Africa. 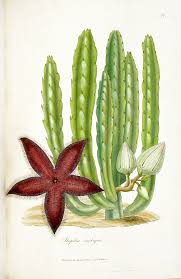