The Seed Beds of the State

December 2, 1707
Today is the birthday of the German theologian and educator, Johann Julius Hecker.
Johann recognized that a classical education didn't work for everyone, so he founded secondary schools in Germany that prepared students for practical jobs and callings.
Johann referred to his schools as

"the seed-beds of the state, from which the young, like trees from a nursery, could be transplanted in their proper places."

Johann's work attracted the attention of the king of Prussia, Frederick the Great. King Frederick encouraged Johann to expand his efforts. So, Johann installed gardens near his schools to teach hands-on botany. Johann’s gardens included vegetables, herbs, and fruit trees. After realizing that the production of silk and the care of silkworms would probably impress the King, Johann strategically added the mulberry tree to his list of crops. Like the Monarch butterfly and milkweed, silkworms biologically evolved with their only food source: the Mulberry tree. Thanks to Johann’s vision to grow the school garden, both the teachers and his students tended to a large mulberry plantation and mastered the culture of silk and mulberries. 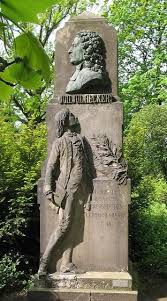